Addictions, Poverty, Housing and Homelessness – We have rights, Right? 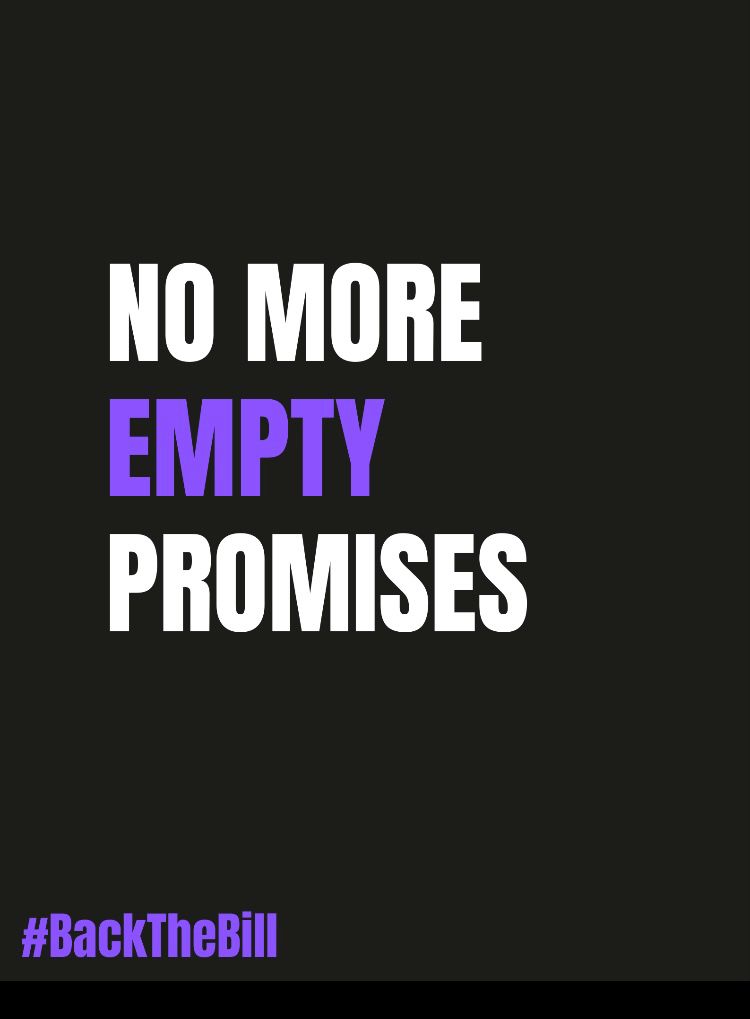 Addictions, Poverty, Housing and Homelessness – we have rights, right? 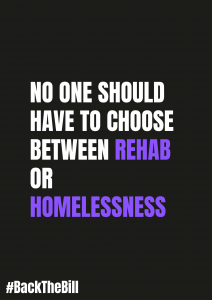 Over the last 2 years our campaign work has taken us in directions we never expected. One of those paths led to working with new partners, including Shelter Scotland, to ensure people suffering from an addiction didn’t face the choice between residential rehabilitation  or their home. Ofcourse Our work in this area wont end with the announcement of the new fund .

Together with Shelter Scotland we were able to resolve, at least temporarily, that when someone goes to residential rehabilitation, and when their rehab is paid for by Housing Benefit, they can claim rent payments for both and so aren’t required to decide between rehab and being homeless. This emergency fund was announced by the Scottish Government, after our joint activity clearly highlighted the injustice in the current system. Making people choose between going into rehab to recover from their addiction OR keeping their home was clearly an indication that the dots between health and housing did not join.

Also, it became clear to Favor UK that the majority of the treatment industry in Scotland was wary of working with us because of the barriers we were highlighting and valid criticism we were shining a light on and putting forward to the highest levels of government.  As homeless stats & poverty continue to rise, alongside the ever-increasing drug death figures, we could see its importance more than ever that we take a whole system view to solutions. We have to build alliances and partnerships outside the treatment world, and none of us can afford to be happy with the status quo anymore.

According to the Ministry of Housing, Communities & Local Government, around two thirds of rough sleepers had cited drug or alcohol use as a reason for first becoming homeless, but homelessness should never be the outcome of trying to deal with that addiction, ever, it’s unjust. Can you imagine any other health condition where the cost to someone of treating it meant you’d be made homeless? Can you imagine the public outcry? Why is there no such outcry in this instance? Is it because it’s “just addicts & alcoholics”?

We cannot be quiet on this while we all drive to end poverty, drug death and  homelessness. To tackle this we must join the dots.

We hear that phrase an awful lot right now. What dots are we joining and what do we join them with?

It would be so easy just to accept that poverty or homelessness isn’t our specific field and walk away. However, when people are unable to access treatment for their addiction, losing or struggling to get or keep a home, or worse, dying -it is all of our business. Between myself and the co-author of the “Right to Recovery Bill,” Stephen Wishart, we have lost 6 friends just through the pandemic due to drug overdoses, and every one of them had been seeking a solution. 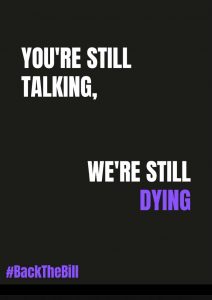 We all benefit from our own legal rights in everyday life, well most of us would at least expect to. Imagine you had no specific rights – imagine trying to explain homeless rights to someone without the 1987 Act (or the 1996 Act in England). Imagine a Code of Guidance with no legal foundation, where whatever you’re told is what you get, and you should be happy with. That’s really the best way we can explain someone’s rights when seeking help with addiction, there really isn’t any other than you’ll get some form of help as soon as someone is free to do that and it will be what we decide is available locally.

So, in March/April 2021, we had a look at what these legal rights may be for people who have addictions and how we “join the dots” by underpinning rights in law. We drafted what was known as the Drug & Alcohol Treatment (Scotland) Bill, and then the Right to Recovery (Scotland) Bill Proposal. The general principles of this proposal are that a person seeking drug/alcohol treatment can quickly access their preferred treatment option, unless a medical professional deems it harmful, where even then they would be required to give written reasons and so opens the avenue for a challenge. Pretty basic stuff really.

This Bill proposal was compiled by reviewing an old 2006 Bill, recommendations from an academic report, consultation with wider professionals and partner organisations – including those with lived experience – all compiled into one document. This ensures that we could take into account as many differing viewpoints as possible and this approach ensures that working in partnership continues to be an approach to drive real change with, and within, communities. This approach really shone a light that in terms of change in the addiction field it will not come directly from within only, but it will come from a wider coalition with different aims but shared values & principles. 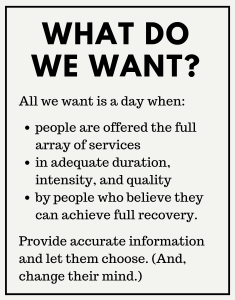 The Bill would also ensure that a wider, holistic, approach is taken to someone’s care, including housing, given that many of our peers continue to raise the issue of going from “rehab to hostel” as an example of a system that isn’t helping. Often reporting that they were put in a place where drugs were readily available – setting them up to fail.

More recently the contents within the proposal are echoed by, albeit far more in depth, in Dame Carol Black’s report and also the MAT Standards here in Scotland. These run at a risk of failure, like many codes/guidance with no judicial backing, and being ignored unless we can underpin them in law. Allowing people, systems & services  to be challenged and held to account where necessary – it’s about equality and justice, having “some rights” just doesn’t cut it.

We cannot afford to be lax about what is needed, we cannot build on sand here we must build on a solid legal foundation. We have to apply all of the recommendations if we want to succeed in all the areas of poverty, homelessness, addiction. Applying a fully holistic, whole system approach is required because as soon as we cherry pick parts that are more palatable, we are on the road to continued failure.

When the Human Rights Act then came into force in the UK it brought most of the rights contained in the ECHR into UK law, ensuring that individuals could take their cases to domestic courts instead of having to wait for justice at international courts. This includes the right to life, the right to health, it’s really the minimum we should expect. But it’s also important to ensure that when someone’s exercises that right, they do so with the utmost choice in what that looks like.

In a perfect world, we should all expect the same legal rights when we need them. Sadly, this isn’t a reality. It’s usually those who most need them who suffer the most. That’s why it’s important that the law holds public bodies and decision makers to account when all we seek is equality and fair treatment.

That includes the homeless, people with addictions, the brother, sister, mum or dad – my friends. No-one should drop through the safety net that law creates.

The people we have lost, they can’t fight for their rights anymore – but we can. “The dead cannot cry out for justice. It is a duty of the living to do so for them”. ― Lois McMaster Bujold

We need to take a cross-sector health approach to these issues, as soon as we do, we can start to help people to heal. We can start giving them choice, giving them hope. And build their rights on a solid, legal, base.

It’s time to join the dots.

You can write to your MP & MSP & ask them to support the Bill by clicking here.