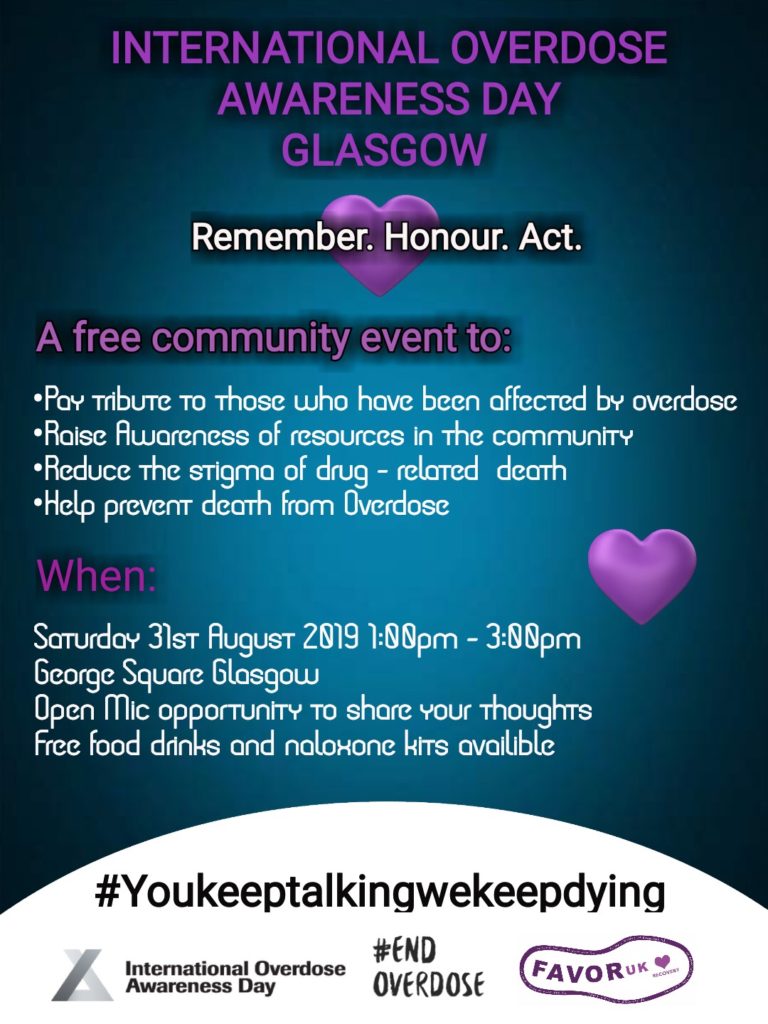 International Overdose Awareness Day aims to raise awareness of overdose and reduce the stigma of a drug-related death.

It is also an opportunity to stimulate discussion about evidence-based overdose prevention and drug policy.

International Overdose Awareness Day acknowledges the grief felt by families and friends remembering those who have died or suffered permanent injury due to drug overdose.

International Overdose Awareness Day spreads the message about the tragedy of drug overdose death and that drug overdose is preventable.

The goals of International Overdose Awareness Day are:

You can read more about it here https://www.overdoseday.com/about-us/

The latest statistics on Scotland’s drug-related deaths  make for shocking reading. 1187 drug-related deaths were registered in Scotland in 2018, 253 more than the previous year. This represents a 27% increase since 2017 and is more than double the figure for 2007. Deaths have been at record levels for five years  in a row.  At 21.98 deaths per hundred thousand people, Scotland’s drug death rate is now:

Most drug-related deaths involve more than one substance.

The number of deaths was more than ever before for:

Natalie Mclean had this to say in response to figures:

“I have watched the figures rapidly increase since 2011, its time we focus our approach on those with lived experience of recovery and not those with 30 years experience of addiction. Unless radical changes are made the numbers will continue to rise .“

Dougie MacMillian said “We now have a situation in Scotland where more than 3 people a day are dying from illicit drugs, we need to stop pushing those who are most at risk away from the protection of the law.  If those substances currently prohibited by legislation from half a century ago were legalised, and regulated, and controlled, we wouldn’t have another family bereavement every 7 hours and 12 minutes. Scotland has its own legal system and its own independent health service.  However, the Misuse of Drugs Act (1971) defines drug use, first and foremost, as a crime; forcing Scotland’s government and public services to respond in kind.  It’s time the Scottish Government demanded the powers to remove this legislation and treat the use of drugs as a public health issue, allowing us to help people without stigma, without shame, and most importantly as citizens.”

“Each & every  one of the UKs drug deaths are an avoidable tragedy, and the failure of our treatment systems, politicians in Westminster and Holyrood to act is an abhorrent catastrophe . This public health crisis is a consequence of a one size fits all, woefully inadequate treatment system, socially inadequate conditions, poverty, and a class issue. It is predominantly our poor people from poor neighbourhoods who are losing their lives. The figures released last month in Scotland showed 1187 drug deaths 3 times that of England, the worst in Europe brings absolutes despair across our nation. We would like to offer our sincere condolences to everyone affected.  No part of the UK should be the drug-death capital of Europe – let alone of the developed world. It is in the hands of the UK and Scottish Governments to stop this catastrophe continuing, and they need to act now.

About Faces & Voices of Recovery UK

Faces & Voices of Recovery UK are a national charity, made up of individuals in recovery, their friends and families and Community Recovery Organisations.

Faces & Voices of Recovery UK is dedicated to organising and mobilising: